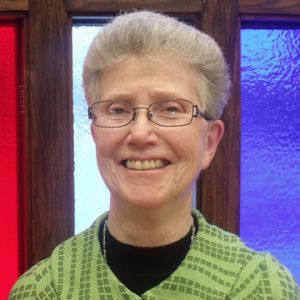 Harriett Elizabeth Ping was a Christmas present to Harry and Marguerite Pranger Ping, as she was born on December 24, 1932, in Fort Madison, Iowa.

The Ping family lived among other Catholic families in the east end of Fort Madison and belonged to St. Joseph parish. The Sisters of Humility taught in the small parish grade and high schools, and families were very familiar with each other, according to Sr. Justine Denning.

In September 1951 Harriett entered the Congregation of the Humility of Mary in Ottumwa, Iowa. She received the habit and her name in religion, Sister Mary St. Edward, the following summer. She professed her commitment to the vows of poverty, chastity and obedience in July 1954. She made final vows in 1957.

Having received her Associates degree from Ottumwa Heights College while in the Novitiate, Sr. St. Edward was qualified to teach grades through high school. She taught at St. Alphonsus school in Davenport for two years and took classes at Marycrest College. She completed work on her undergraduate degree in Elementary Education in 1958. She then taught for a year at St. Mary School in Ottumwa.

Sr. Mary St. Edward began her career teaching science and math in high school at Assumption High School in Davenport for two years. She then moved west, far west, to St. Leo School in Lewistown, Montana. After a year she returned to rural Dunlap, Iowa where she taught science at St. Joseph School in the Des Moines diocese. She continued her diocese-hopping by moving to Gehlen High School in LeMars in the Sioux City diocese in 1964, where she stayed for four years.  It was there that the Humilities began their changes in response to the call from Vatican II for renewal of religious life. Sr. Mary St. Edward resumed her baptismal name, Harriett, and started wearing a modified habit. She concluded her round of Iowa dioceses in Marshalltown, at Lenihan High School, in the Dubuque archdiocese for two years. She completed a masters degree in Science Teaching from the University of North Dakota in 1969, following studies there during summers. For her last 11 years of high school teaching, Sr. Harriett got to go home to Fort Madison where she taught at Aquinas High School in the Davenport diocese from 1970 to 1981.

During many of those summers Sr. Harriett went back to the Heights and helped in the gardens, kitchen, laundry – wherever needed – and resumed her friendship with Sr. Miriam Ehrhardt who was in food service. This was now the new Heights complex, Motherhouse, Novitiate and Junior College, following a fire in 1957 that had completely destroyed the existing building. Other summer companions were Srs. Karen Macksey and  Rosalia Riedl. According to Sr. Miriam Ehrhardt, one summer the four took a trip to the Upper Peninsula of Michigan. They had such a good time that trips together became a habit. Sr. Miriam, the driver, usually did the scouting and planning and each of the others had a part. Destinations included Seattle, the Oregon coast, Estes Park, and the Grand Tetons, the latter being Sr. Harriett’s favorite place.

Having completed her ministry in education, Sr. Harriett returned to Davenport, where she worked in the Cone Library at Marycrest College from 1981 to 1997, most of that time in the Media Collection. She lived briefly at St. Mary’s Convent, where Humilities now taught, and she walked back and forth to Marycrest.

In 1981 the sisters had left the Heights complex after the college had merged earlier with Indian Hills Community College, which had purchased the property. Former residents and staff were spread out across Iowa and elsewhere. Because the new Humility of Mary Center was not completed, the CHM administration had offices on the Marycrest campus for a year. Sr. Mary Ann Vogel was Finance Director and also lived in Rohlman Residence Hall; Sr. Sue Sellers, who worked at the Cone Library desk, joined her there. Sr. Harriet joined them in 1986 and, a year later they were written up in the college paper, The Crest, with the headline “Prayer, Laughs, Friendship Guide Trio.” The article stated that their common denominator was “food,” preferring Rudy’s tacos, Whitey’s ice cream, and they claimed to consume a world record of popcorn. They were active women, too, as Srs. Harriett and Mary Ann often swam in the early morning at Humility Center with Center Director, Sr. Claudellen Pentecost. Cycling was also listed as an activity. It was reported that they “did lots of fun things” but said they were also “pretty serious” about being nuns. Sr. Harriett was quoted as saying that it was her “stability and great wisdom” that made the three of them click.  Eventually, she and Sr. Sue moved into apartments on West 14th St. where Srs. Miriam and Karen already lived. This is how community was built, and reconfigured, in the post-Vatican II world.

In 1998 Sr. Harriett moved into an apartment near the Bishop Drumm campus in Johnston, Iowa, while working as a receptionist at Martina Place, the assisted living facility there, for four years. She moved back to Davenport in 2002 and lived at Humility of Mary Center where she was a welcome volunteer. She helped at Our Lady of the Prairie Retreat facility wherever and however she was needed for years. She was a familiar face at the Humility of Mary Housing offices, then on East 12th St., where she specialized in sorting donations and helping with the big, annual garage sale conducted by Gertrude Vogel, Sr. Mary Ann’s mother.

When she moved to Bishop Drumm Care Center in 2014, Sr. Harriett had a room in the wing that enabled her to  look directly at the main entrance. She could tell you who was coming or going at any time, even in the very early morning. She had her meals in the big dining room and made her rounds to greet the sisters, other residents, and visitors. When Harriett's health was good, she went to daily Mass and loved to go to the Garage Sale on Thursdays. After Sr. Cathleen Real came to Drumm, Sr. Harriett would occasionally come to the Sisters' dining room to eat with her.

Any record of Sr. Harriett has to include that she was a fanatic about Notre Dame University football. She was surrounded with regalia of all things “Fighting Irish” in every space she occupied. She had multiple autographs of Lou Holtz, her favorite. In one he wrote, “Sister Harriett, you have our admiration and respect. We are proud of you.” She knew many players personally, having met them or written to them. Sr. Harriett and Sr. Sue Sellers had an annual fall weekend tour, 22 years in all, to the campus for a game. They stayed with Sr. Sue’s cousin there, becoming part of their family. It was a ritual.

April Young, Director of Mission Integration at Bishop Drumm, said that when she saw Sr. Harriett, they often talked about what the moon looked like the night before. They would repeat, back and forth, the rhyme /song, "I see the moon and the moon sees me,” to the end “God bless the moon and God bless me, and God bless that someone I want to see." One of the last times April saw sister, she told her she loved her and Sr. Harriett responded, "The feeling is mutual.” Then April said, "I'll see you in the moon." To which Sr. Harriett responded, "You know it." After Sister died, April observed, “I will think of her beautiful, ornery, loving, funny spirit every time I look up and see the moon.”

When Sr. Harriett left us, it may have been with this invitation she had written some time in the past:

Come into the mountains, friend

Get close to nature

Your everyday games will be insignificant

And try to do that with your life.

Memorials can be made to the Congregation of the Humility of Mary Here...