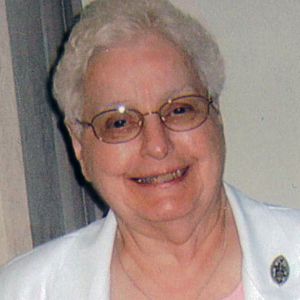 There is surely rejoicing in heaven by the LeBeau family as parents William and Leah, and her brothers and sisters welcome Sr. Joan home.  Friend and house-mate, Sr. Thomasine Muller, has been waiting a long time for her, too.

Joan Margaret LeBeau was born in Chicago to William and Leah Marie Menard LeBeau on May 15, 1933.  She attended St. Mel’s grade school and graduated from St. Mary’s High School there.  She is the last of seven siblings, her two sisters and four brothers having predeceased her.

In January of 1953, Joan entered the Congregation of the Humility of Mary in Ottumwa, Iowa.  One source says she learned about the community from Pat Gawlik, who she knew socially and who had become a “Humility”, Sr. Miriam Paul.  That summer she received the religious habit and her name in religion, Sister Mary LeAnne.  She made vows in 1955. Her classmates Sisters Roberta Brich and Caridad Inda remain with us.  Following Vatican II, Sr. Mary LeAnne returned to her baptismal name, Joan.

Sr. Joan’s ministries can be summarized by saying that she made people happy.  She was cook, baker, housekeeper, and nurse-caretaker in a variety of settings.  During her early years, Sr. Joan had attended Programs led by Brother Herman for sisters in food services.  She served Humility of Mary sisters, staff and students at Ottumwa Heights, then residents and staff at St. Vincent’s Orphanage in Davenport, and Bishop Drumm Retirement Center where her last role was as Assistant CHM Coordinator.

From 1966 to 1978 Sr. Joan was on the staff at Dowling High School in Des Moines.  That meant serving students and school staff as well as many priests, including  retired diocesan priests.  During this period, members of the congregation made changes following the directives from the Second Vatican Council.  Most obvious was the trade of the traditional long, black habit and veil to simple street dress, with or without a small veil.  Social interaction with family, ministry partners and the public was relaxed and sisters no longer had to have a companion to accompany them in public. More significant changes, however, were providing flexibility in community prayer, with emphasis on the celebration of the Eucharist and modified prayers of the liturgical hours at morning and evening.  Less visible, perhaps, but significant, were changes in the practice of the vow of poverty, making its practice less dependent on obedience to the superior.

Having more personal choice in the type and place of ministry, also pursuant to Vatican II changes, Sr. Joan chose opportunities to work in food service in nursing facilities, at Crestview Acres for twelve years and at Mercy hospital-related facilities for ten years. She than shifted to housekeeping services at Park Place Apartments for seven years, also in Des Moines.  On her quilt block, included in the beautiful, large quilt done for the new millennium, she stitched a vacuum sweeper, broom and dustpan to represent her work at that time.  In 2002 she accepted a position at Bishop Drumm Retirement Center, eventually becoming CHM Assistant Coordinator with Director Sr. Mary Ann Leto.

Sr. Joan and Sr. Thomasine Muller were long-time friends and lived together in Des Moines, while both were doing housekeeping at Dowling in the mornings.  They answered a newspaper ad for someone to do in-home child care for an infant, when her mother returned to part-time teaching at Sacred Heart School in West Des Moines.  That began a life-time, relationship with Anita and Don Westerhaus, and their children, Jenny and Andrew.  Sr. Joan would drop Sr. Thomasine at the Westerhaus home at noon to take care of both children as infants.  The two sisters quickly became part of the family, joining  them for birthdays and holidays.  Both sisters were special guests at Jenny’s wedding in Des Moines.

Srs. Joan and Thomasine continued applying their domestic skills to making gingerbread houses for contests, auctions and fund-raising to support Anawim Housing that served homeless and low-income persons.  Sr. Thomasine often accompanied Sr. Joan on visits with her family in Chicago.  They usually stopped to see the sisters at Humility of Mary Center, and included a trip to the casino at the riverfront.  After Sr. Thomasine moved to Bishop Drumm, Sr. Joan and she went out to eat regularly.  Sr. Joan was very  attentive to Sr. Thomasine during the last years of her life at Bishop Drumm.

Sr. Joan moved to Humility of Mary Center in Davenport in 2010.  She was assisted in the move by the Westerhaus family.  She took advantage of the pool and participated in the morning pool exercises several days a week.  After Sr. Cecelia Vandeberg moved to the Center, Sr. Joan and she attended the weekly Legion of Mary meeting at Holy Family Church.  Sr. Joan carried her cell phone everywhere she went, using it to keep in touch with family, in particular.   She visited them when she had opportunities to accompany sisters and friends who were going to Chicago.  Her big trip was one to California with her family, that she described as the trip of a life-time.

While living at the Center, Sr. Joan started having heart-related problems that, eventually, led to her moving to Bishop Drumm Retirement Center in September 2016.  While there, she sometimes slipped back into her earlier caretaker role, ever alert to the needs of those around her.  Staff said she was especially attentive to a next-door neighbor, making sure she got to  church and meals.  Sr. Joan did love to visit and  often made friends with family members of residents.  After one woman across the hall from her passed away, her daughters continued to send Sr. Joan a card or flowers for special occasions.

Sr. Joan had provided very personal services to others during much of her ministry life.  She engaged easily with people, was plain-spoken with them, and you pretty much knew where you were with her.  She modeled the virtue of humility by her simplicity of life, characterized by “straightforwardness, candor and the absence of all affectation.”  (Search & Service, Book I, §5.)